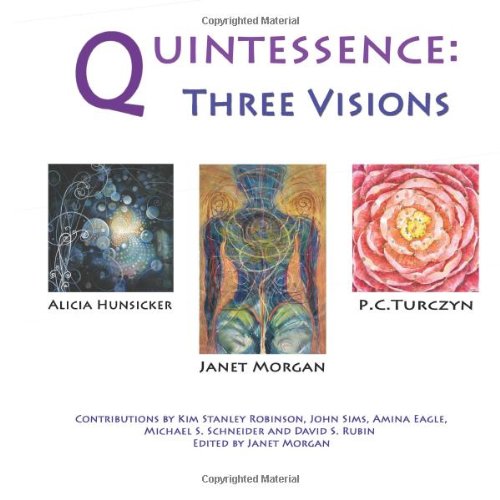 
Now available for purchase this stunning exhibition catalog with artwork by Janet Morgan, PC. Turczyn, and myself with writers Amina Eagle, David Rubin, Michael Schneider, John Sims, and with an introduction by Kim Stanley Robinson.

Three artists explore form, energy and movement from the smallest scale that humans have discovered to the sacred geometry of nature to the realms of the human body. Informed by science, observation and intuition, the invisible is brought to light in three distinct styles developed from deep exploration and fine craft. The word Quintessence, from the ancient Greek for the mysterious ‘fifth element’, is now used as a descriptive term in cosmology for equally mysterious ‘dark energy’. It is a fitting theme for the desire of artists to make the invisible visible and show the underlying energy sources in and around us. This is the exhibition catalog for Quintessence, Three Visions at the Ram Dass Library of the Omega Institute in Rhinebeck, New York, April 20 - October 30, 2014.

Posted by Alicia Blaze Hunsicker at 11:44 AM No comments: