The reception for the Canvas Project (a show that my work is in) took place on Friday, September, 25th at the Art House Gallery in Atlanta, GA. The show hung in conjunction with The Million Little Pictures Project which documented each participants life in 24 pictures.
Here are some photos from each Courtesy of Arthousecoop’s Flicker site
click on the link to see more! 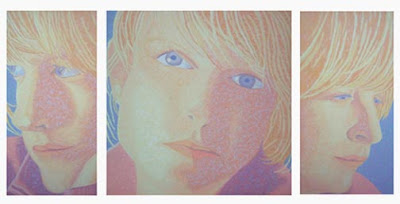 Deerfield, Massachusetts-based artist, Marcia R. Wise crops the face closely with little or no background, often excluding the top of the head, hair, parts of chins, ears. Her focus is on the language of the eyes. Sometimes the eyes pose a question or cause one to wonder what is being seen, thought, felt, or said. More....
Posted by Alicia Blaze Hunsicker at 5:42 PM 2 comments:

First I would like to Welcome the new blog followers that have come into my world!
I realized this week that my blog is officially 1 year old....and somehow I feel like I am just getting started with it. I am finishing up my application for Vermont Studio Center today and am hoping for a slot this spring. This is my first time applying for a residency with a month duration and it is a very competitive so either way ~ I know that I will attend when the time is right for it. I have been working on my portrait commission this week and feel that it is half way done at this point. Here it is in progression......Enjoy! 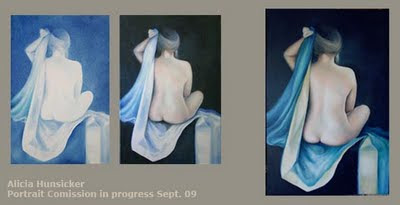 Posted by Alicia Blaze Hunsicker at 11:46 AM 2 comments:


This reception will also feature another Art House project: A Million Little Pictures: DocumentaryWhere hundreds of artists from all over the world documented their lives using a simple disposable camera. Thousands of photos will tiled across the gallery walls on display.

This will be a fun opening! I wish I could make it. If any of you are in Atlanta stop in and let me know how my work looked :-)
Posted by Alicia Blaze Hunsicker at 8:38 PM 2 comments:

The PaperGirl Project distributed donated artwork throughout the streets of Northampton on Sept. 12th in PaperGirl fashion.....on bicycles! Here are a few photos courtesy of the
PaperGirl Project Flicker site where you can see more. 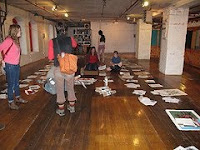 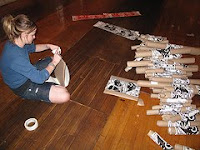 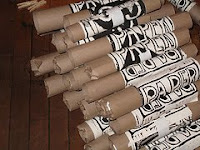 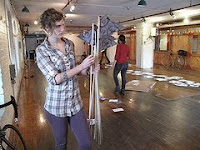 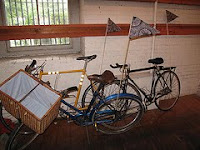 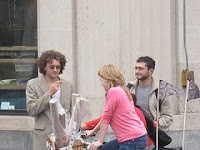 Posted by Alicia Blaze Hunsicker at 10:38 AM No comments:

Finding the balance between making art and marketing it. 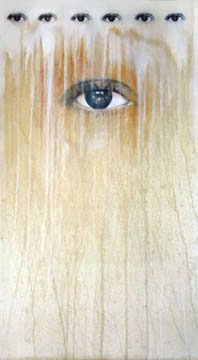 I usually market my work when I am done producing a good body of it which usually translates to about 8 months making 4 months marketing.
This year has been a different kind of year for me. I have done a lot of project specific work that needed immediate marketing so I am finding that I am doing small chunks of time marketing then making then marketing...etc.... As well as marketing and producing at the same time. A whirlwind of activity!

The optimal balance still eludes me!! But I am happily trying new ways and seeing what is possible.
In the studio I am working on the figurative commission piece and will post progress in a week or so. I am also working on my Eye explorations and have started a larger piece which is pictured here. I like how it is progressing but have not found the missing element for this painting yet. (or it may be done, HA!)
I am also in the process of promoting the group show I am participating in this October ...Landscape : Scene and Unseen.
Filling out paperwork and applications for a Vermont Studio Residency, MCC fellowships....and a few shows that may work for me at Woman Made Gallery in Chicago and with the Woman's Caucus of Art.
and if that wasn't enough.....I have been exploring the possibilities of networking on Face book. I am enjoying meeting other artists and getting plugged in to what is happening in galleries and museums around the country.
Now that I have settled down into the Fall schedule at home I hope to be able to focus even more on my studio practice while continuing to indulge in the practice of having regular studio visitors and visits.
Posted by Alicia Blaze Hunsicker at 11:21 AM 2 comments: 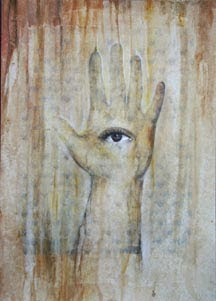 Last night's arts night out in Northampton was Fantastic!! First I must say that the PaperGirl Project Closing Reception Rocked! It had such vitality and spirit. I enjoyed meeting both Katherine Romansky and Eben Kling (the organizers) and will look forward to seeing what they come up with for future art projects. Thanks to all my Peeps for coming out to support me…You know who you are!
I also enjoyed the show at A.P.E. Gallery with artist Nancy Winship Milliken, who uses animal intestines and sheep wool to construct her pieces.
R Michaelson gallery had the new work of Robert Masla, digital image under paintings on canvas with painting and other mixed media. Interesting work!
And finally the WM. Baczek Gallery who had a black and white show with really beautifully rendered graphite work. They all deserve a look if your planning to go to Northampton. We topped off the evening with a wonderful meal at an Argentine restaurant. A notable night out!
Posted by Alicia Blaze Hunsicker at 11:24 AM No comments:

AMHERST, Mass. – In introducing a new monthly arts event, the Hillside Salon, to the area on Tuesday evening, Sept. 15, Sabine Holub, wife of University of Massachusetts Amherst Chancellor Robert Holub, says she hopes to strengthen the local arts community and create a space where artists and friends of the arts can connect. The salon, organized in cooperation with the University Gallery, will be held at Hillside, the chancellor’s residence on the UMass campus, from 6 to 8 p.m. The evening’s format will follow a new concept called Pecha Kucha (“pe-chak-cha”), the Japanese phrase for “chit chat.” It allows each artist 20 seconds per slide to show 20 views of his or her work, a total of only about six and a half minutes per person. After all presentations are made, the salon is open to conversation and discussion. Pecha Kucha Nights are now observed in 230 cities worldwide, according to organizers.

The public is invited to attend the Hillside Salon in Amherst by making advance reservations. Following this month’s initial event, the Hillside Salon will be held on the third Tuesday of each month, featuring four or five artists each evening “to keep the selections fresh and varied,” Sabine Holub says.

Space is limited; for more information or to request a reservation, call 413/545-4336, or e-mail: Hillside@umass.edu.

Five artists with local connections will be featured at the first Hillside Salon:

• Amy “BannerQueen” Johnquest of Northampton. Her creations play with painted images and the language used in signage. Current BannerQueen projects include the window of the Big E grocery store in Easthampton, cover art for the Massachusetts Review and the window the Fresh Pasta Co. in Northampton. Johnquest also directs the Taber Art Gallery at Holyoke Community College.

• Silas Kopf of Easthampton, a custom furniture maker specializing in marquetry decoration, the traditional craft of piecing different woods together to form pictures or designs. His work is displayed at galleries in Santa Fe, Philadelphia and New York City.

• Chris Nelson, a site-specific installation artist based in western Massachusetts who has exhibited widely in the United States and Japan. His work uses the environment plus “the energy a space holds, including shape, size, structural materials, light, and location,” he says.

•Shona Macdonald, a painter born in Scotland now working in western Massachusetts, inspired by the “signs and myths inherent in maps.” She says the imagery in her work “resembles rough aerial topography. Up close, the small, clustered signs and symbols ‘come into focus’, revealing ‘place’ more literally. Snowflakes are likened to islands; mountains to shells.”

• Angela Zammarelli of Northampton is a 3-D artist who received her BFA from UMass Amherst in 2003. Her work plays with new settings for familiar domestic objects such as bags, dish scrubs and thread

http://www.umass.edu/newsoffice/newsreleases/articles/92359.php
Posted by Alicia Blaze Hunsicker at 1:09 PM No comments:

Here are a few photos from the PaperGirl installation at Sticks & Bricks Gallery, Northampton. My piece is in the upper left. 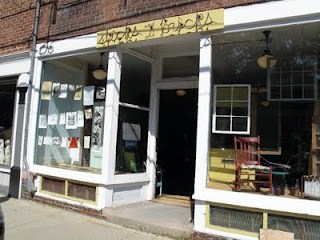 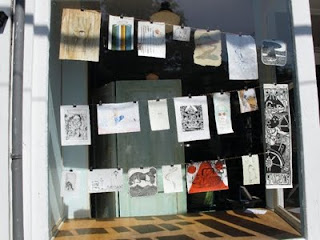 Posted by Alicia Blaze Hunsicker at 2:46 PM No comments:

My Painting has been Selected for The Northampton Arts Council's "Landscape: Scene and Unseen" Show

I am pleased to announce that my work will be included in the The Northampton Arts Council's
Landscape: Scene and Unseen at the Hosmer Gallery
October 3-31, 2009
Reception: Friday, October 9, 5-7 PM (Arts Night Out)

The Northampton Arts Council presents a biennial juried exhibition of two and three-dimensional work. The juried exhibition was open to artists living in Western Massachusetts and the response was impressive, with over 80 entries received, making the jury process a challenge.
The jurors: Stuart A. Chase/Executive Director of the Berkshire Museum,
Walter Cudnohufsky/ Landscape Architect and founder of the Conway School of Design and
Jo Ellen Harrison/founder of Harrison Gallery in Williamstown;
gave thoughtful consideration to all work. They were delighted with the quality, variety and integrity of the submissions and selected works from 24 artists for LANDSCAPE: SCENE AND UNSEEN.

While landscape is often restricted to habitat, this show celebrates what might be called “inscape”—a view into the artist’s interior environment.

The Northampton Arts Council presents this exhibition with support from the Massachusetts Cultural Council and the City of Northampton. To learn more about the Arts Council, please visit northamptonartscouncil.org. 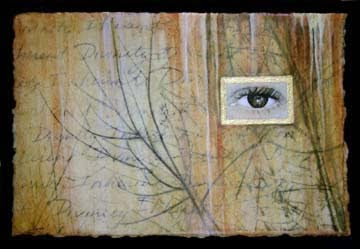 I finished my piece today. A mini composition after one I created for my Inherent Divinity Series.

Posted by Alicia Blaze Hunsicker at 7:32 PM No comments:

The Eyes are finished, now I have to put the last finishing touches on them; the names and the varnish. Painting small names with a brush on canvas isn't easy!! I really enjoyed this commission. It started with a photo shoot with a family of 6 then some photoshop to get the iris the right size, then the painting, now the finishing. I would welcome more Eye Portrait commissions of others like these. These were done on 4x4 inch gallery wrap canvas and they look good hung in a grouping or even displayed on a table or shelf. 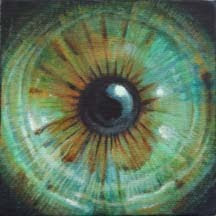 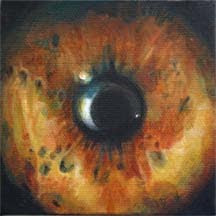 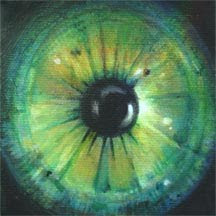 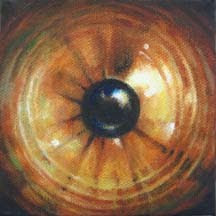 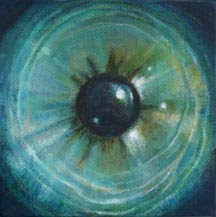 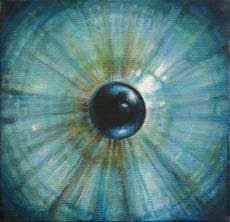 Posted by Alicia Blaze Hunsicker at 1:57 PM No comments:

MCC Artist Fellowships program guidelines are now available. This cycle, the program offers fellowships of $7,500 and finalist awards of $500, as direct support to individual artists in recognition of artistic excellence.Deadlines for the 2010 Artist Fellowships cycle have changed from previous years. Please note:Applications are currently being accepted in the categories of Drawing, Painting, and Traditional Arts (deadline: October 13, 2009).Applications in the categories of Choreography, Fiction/Creative Nonfiction, and Poetry will be accepted beginning December 1, 2009 (deadline: January 25, 2010).Since the program was initiated in 1974, grant support has been provided to hundreds of Massachusetts artists. These highly competitive awards provide artists crucial recognition and pave the way for creative innovation of enduring cultural value. To see the work of past Artist Fellows and Finalists, visit Gallery@MCC. Apply on-line
Posted by Alicia Blaze Hunsicker at 7:10 PM No comments:

Here are some photos from the Installation Day for the Paper Girl Project, Northampton at the Thornes Basement location (I see 2 of my pieces here). They have a nice variety of artists and work with over 300 pieces donated to be distributed randomly on Sept 12th. 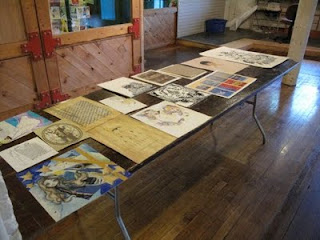 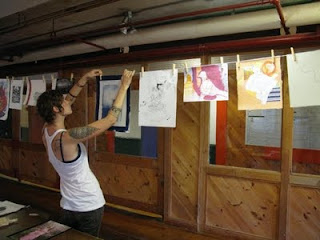 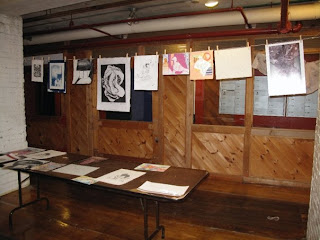 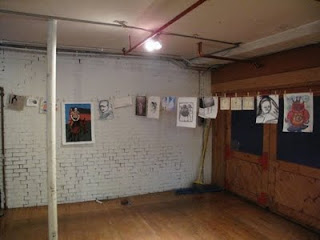 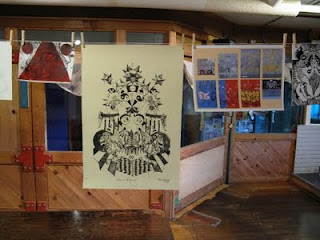 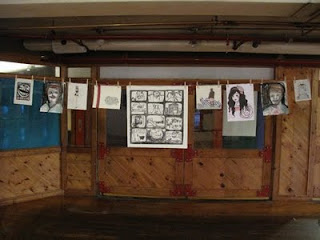 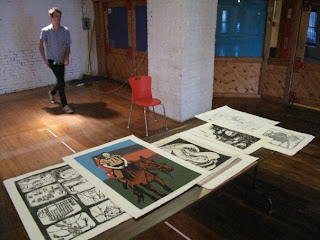 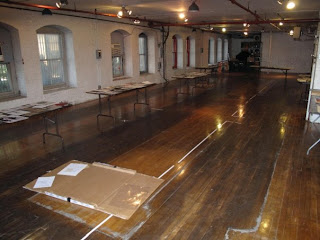