Why Science Needs Artby Jonah Lehrer
The more we know about reality, the more palpable its paradoxes become. The author of Proust Was a Neuroscientist and editor of SEED magazine, believes that artistic interpretations of scientific ideas and theories offer science a new lens through which to see itself while also furthering our inquiry into the nature of consciousness.

Read more of the article here.
One of my favorite paragraphs.....
But the trajectory of science has proven to be a little more complicated. The more we know about reality—about its quantum mechanics and neural origins—the more palpable its paradoxes become. As Vladimir Nabokov, the novelist and lepidopterist, once put it, "The greater one’s science, the deeper the sense of mystery."
Posted by Alicia Blaze Hunsicker at 7:06 PM No comments:

Noosphere and The Global Consciousness Project 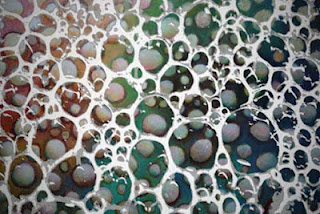 Science hones answers into our origins…..
What we have been taught is being challenged by new discoveries!
To get up to date check out Scientific American’s publication
“A new look at Human Evolution”
These developments excite me!!!!

Scientists have also discovered a field of intelligent energy that surrounds us all and connects us and what we think and feel have an effect on this field.
This field appears to be a web that makes up the fabric of space.
This field is everywhere all the time. It’s the stuff that is in the nothing.
Scientists are calling it by many names…Quantum Hologram, the mind of nature, noosphere, or even the mind of God.....only to name a few.

Princeton University is now studying that field in a project from the
The Institute of Noetic Sciences which is directed by Roger Nelson called “The Global Consciousness Project” It askes the question “What is the nature of Global Consciousness?”
This project developed technology that detects and responds to this field and measures changes in mass consciousness.
The devices known as EGGS were planted all over the globe
And have been monitored for the last 12 years.
This field fluctuated before global events like 9/11 or in a more positive scope during times of mass prayer.
You can see this mapping and data collection in real time on their website.

The projects starts “Coherent consciousness creates order in the world.
Subtle interactions link us with each other and the Earth.When human consciousness becomes coherent and synchronized, the behavior of random systems may change. Quantum event based random number generators (RNGs) produce completely unpredictable sequences of zeroes and ones. But when a great event synchronizes the feelings of millions of people, our network of RNGs becomes subtly structured. The probability is less than one in a billion that the effect is due to chance. The evidence suggests an emerging noosphere, or the unifying field of consciousness described by sages in all cultures.
The Global Consciousness Project is an international, multidisciplinary collaboration of scientists and engineers. We collect data continuously from a global network of physical random number generators located in 70 host sites around the world. The data are transmitted to a central archive which now contains more than 12 years of random data in parallel sequences of synchronized 200-bit trials every second. "

To read more go here.
The image above is a painting in progress.